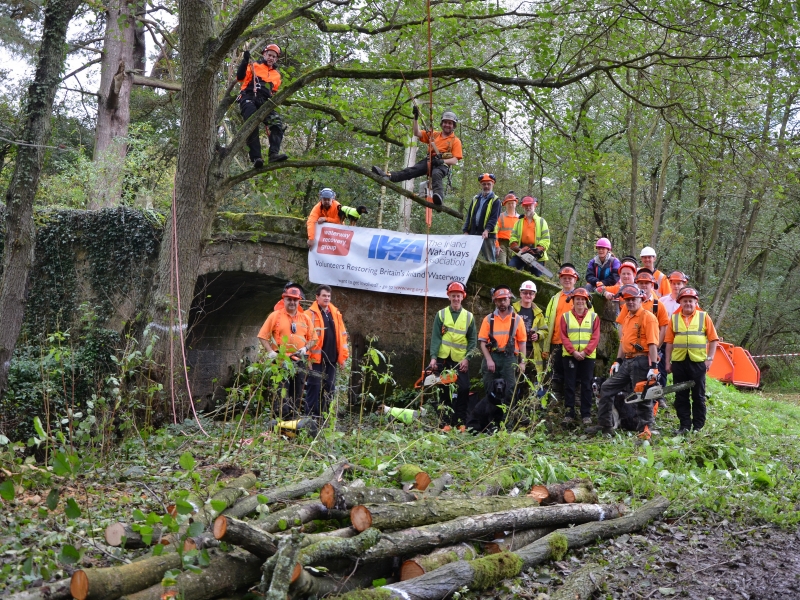 The Uttoxeter Canal was built in 1811 and ran for 13 miles from a junction with the Caldon Canal at Froghall down the Churnet Valley via Oakamoor, Alton, Denstone and Rocester to a terminus in Uttoxeter.

Unfortunately use of the new waterway was short lived and by 1850 it had closed, with some line of the canal being reused by the North Staffordshire Railway. The railway in turn later closed and much of the route reverted to farm land or was reinvented as public footpaths.

The demolition of very significant two canal buildings in Uttoxeter at the same time as the "Destination Froghall" project was under way at the other end of the canal prompted members of the then Caldon Canal Society to look seriously at the rest of Uttoxeter Canal.

It seemed that much of the canal appeared to be in a restorable state, indeed several sections were still in water. Conversely it was quickly realised that would not be feasible to reinstate the last part of the route beyond the A50 dual carriageway into Uttoxeter as nothing existed of the canal beyond the River Tean crossing on the edge of the town.

There were also significant obstructions in Oakamoor, Denstone and Rocester. During informal discussions with members of the Local Authority, the suggestion was made that an area to the north east of the town which is currently a gravel pit may make a suitable terminus for a restored canal. This is already earmarked for leisure use after quarrying ends.

Spurred on by these positive investigations whilst mindful of the need to avoid further damage to the line of the canal, the Caldon Canal Society voted to change its name to the Caldon & Uttoxeter Canals Trust and to adopt additional objectives with respect the Uttoxeter Canal:

Noting difficulties in the Denstone and Rocester area, ideas were developed to depart from the original route to the north of Denstone, taking a completely new route down the valley to the gravel pits.

One other consideration, not on the Uttoxeter Canal itself, is Froghall Tunnel on the Caldon Canal. This short tunnel (75 yards) is technically open to navigation but has limited headroom and so restricts the accessibility of the Uttoxeter Canal as some boats cannot pass through it. The headroom of the tunnel was improved when the Froghall Basin was reinstated a few years ago but would certainly need to be re-addressed if the rest of the canal was reopened.

In early 2009 the Trust, in partnership with Staffordshire County Council, commissioned consulting engineers Halcrow Ltd, to undertake a study to “determine whether the restoration of the Uttoxeter Canal between the Caldon Canal at Froghall to the north and Uttoxeter Gravel Pits to the south is a feasible project.”

The Inland Waterways Association and the two Local Authorities on the line of the canal, Staffs Moorlands DC and East Staffs BC, assisted in the production of this report, which was delivered in autumn 2009 and has been published in full on this website.

In 2013 the Trust began work at Bridge 70 of the Uttoxeter Canal, using a Heritage Lottery Fund grant from the Churnet Valley Living Landscape Partnership to undertake restoration of the bridge and an adjacent section of towpath, in association with the Waterway Recovery Group.

Other projects have been undertaken and are also being developed on other sections of the canal, working towards our long-term vision to see full restoration of the canal. The Trust would welcome any offers of support, either by joining our volunteer work parties or becoming a member of the Trust.