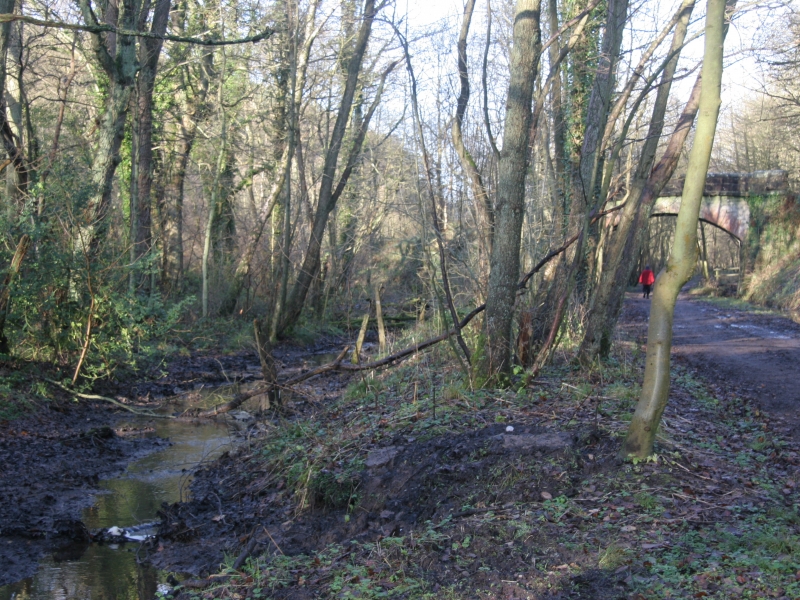 On the surface this might appear to be an easy section to restore as the entire line is undeveloped, and is a popular walking route. Unfortunately, below the surface large gas, electric and sewage mains have been installed which would need to be relocated.

The railway have also recently stated their wish to reinstate the line from their present terminus north of Oakamoor down to Alton, which presents a unique opportunity for a double restoration partnership.

Once past the B5417, the canal would run through the open area of grassland which runs alongside the river.

An 11kV underground electricity cable follows the line of the canal from Oakamoor to Alton. It is likely to be prohibitively expensive to divert or re-lay this cable. It would therefore be necessary to construct the canal adjacent to the cable with it being moved only where required. [note: gas and sewage mains are also present throughout this length.]

The canal follows an existing footpath through the park area with some small areas of minor cutting or embankment required as necessary until it reaches the old Oakamoor Station. At this location, the canal could run either through the old station between the platforms, or run to the north-east of the station. Again this will have an impact on the potential restoration of the railway in the future. The area to the north-east is at a [higher] ground level and would therefore necessitate a 3-metre deep cutting over a length of around 150 metres.

The ground to the east of the canal rises sharply to form a 130-metre length of 25 metre high crags. The canal would need to run at the foot of these crags between them and the railway. Some work would be required to assess their long term stability to ensure integrity of the canal and the safety of boat users.